This workshop was organized by the Mediterranean Information Office for Environment, Culture and Sustainable Development (MIO-ECSDE) as the first of a series of events (meetings/consultations/workshops) to be organized, in cooperation with the United Nations Economic Commission for Europe (UNECE) and the Global Water Partnership – Mediterranean (GWP-Med), contributing to the aims and objectives of the Drin Dialogue process. These will focus on the key role that civil society can play in transboundary dialogue processes such as the Drin Dialogue.

The Drin Dialogue was launched on December 1st, 2009 and aims to establish a Shared Vision for the management of the extended Drin River Basin. An informal body to coordinate the Drin Dialogue, the Drin Core Group, has been established; MIO-ECSDE as the major NGO Federation, was included as member of this group. The Drin Core Group is composed of representatives of the ministries responsible for water management in the riparian countries, the formal and informal joint structures established in the shared river basin (the Prespa, Ohrid and Shkoder Lakes), the UNECE and GWP-Med.

MIO-ECSDE as member of the Drin Core Group committed itself to support the dialogue at regional level, to contribute in establishing a common understanding and shared vision and in enhancing the ability and capacity of its NGO members and other regional NGOs in order to act in an effective and constructive way. 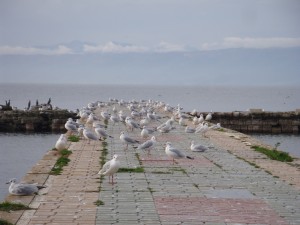 This workshop aimed to assist the coordinated and effective involvement of civil society, and particularly of NGOs, in the Drin Dialogue. Overall, the participatory processes that MIO-ECSDE has initiated among NGOs and other stakeholders (since 1991) have contributed considerably to consensus building, mutual trust and solidarity, all very crucial elements for a successful outcome. This workshop’s objectives were to provide the opportunity to NGOs to exchange experiences about their involvement in the development of river or lake basin management plans, identify obstacles and challenges to successful participation o NGOs and strengthen the relations between the various organisations of the region. In addition, the participants had the opportunity to exchange experiences about the operationalization of different participatory frameworks e.g. the Aarhus Convention, the acquis communautaire, the EU directive for Public Participation, etc., in EU and Southeast European processes and mechanisms such as the Water Framework Directive (WFD), Integrated Water Resources Management (IWRM), Integrated Coastal Zone Management (ICZM), Environmental Impact Assessments (EIAs), Strategic Environmental Assessments (SEAs), etc.

You can download the key presentations (in PDF format) by clicking on the links below:

To view the draft report of the workshop click here