The 3-year long DeFishGear was an IPA-Adriatic funded project aiming to facilitate the efforts of policy makers and stakeholders in effectively dealing with the issue of marine litter in the Adriatic MacroRegion, towards litter free coasts and sea. The DeFishGear activities were implemented by a multi-disciplinary team comprising academia, research institutes, national and local authorities and NGOs from all seven countries of the Adriatic Sea, reinforcing and strengthening cooperation and fostering joint and harmonized actions towards a litter-free Adriatic. MIO-ECSDE led the Work Package on Monitoring and Assessment of Marine Litter in the Adriatic and Ionian Seas.

The DeFishGear project aims to facilitate the efforts of policy makers and stakeholders in effectively dealing with the issue of marine litter in the Adriatic MacroRegion, towards litter free coasts and sea. Ultimately, the DeFishGear project will provide a strategic input to regional efforts in successfully achieving good environmental status in the Mediterranean Sea.

The main outputs of the DeFishGear project are:

The Marine Litter Assessment in the Adriatic and Ionian Seas 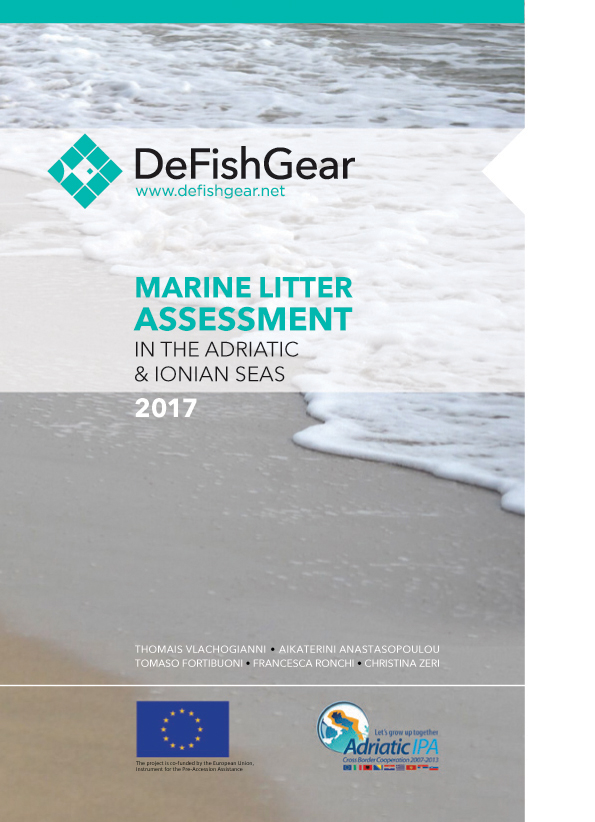 The DeFishGear marine litter assessment report presents the results of the one-year long marine litter surveys carried out in all seven countries sharing the Adriatic and Ionian Seas. More specifically: (i) 180 beach transects were surveyed in 31 locations, covering 32,200 m2 and extending over 18 km of coastline; (ii) 66 floating litter transects were conducted with small-scale vessels covering a distance of 415 km, while a total of 9,062 km were surveyed by observers on ferries; (iii) for the seafloor litter 11 locations were investigated with bottom trawl surveys and 121 hauls were performed, while 38 transects were performed in 10 locations with underwater visual surveys with scuba/snorkelling, thus covering a total area of 5.83 km2 of seafloor; (iv) for litter in biota 81 hauls were conducted and 614 fish individuals were studied. Find the full-text report here

Motivated by the successful cooperation accomplished within the project – the first sub-regional project dealing with the marine litter issue in the Adriatic-Ionian macroregion, establishing and piloting comprehensive, coordinated and harmonized marine litter monitoring throughout the region as well as marine litter related measures – the DeFishGear partners decided to further commit themselves to the fulfillment of a shared vision and form a Network for a Litter Free Adriatic and Ionian Coast and Sea. This network ensures that the contacts and working relationships developed during the project will be maintained and further developed through follow up, collective and collaborative projects and initiatives. Furthermore, it is expected to substantially contribute to efficiently and effectively achieving lasting positive impacts and changes via continuity, coherence and cross-fertilization among and between projects and/or initiatives dealing consecutively or in parallel on the marine litter issue in the region. Read more here

A purpose-built database developed within the scope of the project and publicly accessible at http://defishgear.izvrs.si/defishgearpublic. The DeFishGear database uses the “ArcGIS Server” software for spatial manipulation and the “Nukleus GIS” software for viewing environmental information and it is hosted by the Institute of Water of Slovenia.

Proper monitoring of our coasts and seas is an important contribution to keeping them litter-free. Therefore, MIO-ECSDE produced a video tutorial on how to monitor marine litter on beaches.

A self-paced distance learning module on how to monitor marine litter on beaches, the sea surface and the seafloor was designed to be comprehensive enough yet not time demanding so that any interested busy practitioner, administrator, professional, student or NGO staff member can enhance her/his skills on how to design and implement marine litter monitoring activities. It provides the necessary technical and scientific background to support the design and implementation of marine litter monitoring programmes within the framework of the EU Marine Strategy Framework Directive and the UNEP/MAP Regional Plan for Marine litter Management in the Mediterranean. The methodologies showcased  have been pilot tested by the DeFishGear project and have been developed based on the ‘Guidance Document on Monitoring of Marine Litter in European Seas’ elaborated by the EU MSFD Technical Sub-Group on Marine Litter and the UNEP/MAP MEDPOL draft Monitoring Guidance Document on Ecological Objective 10: Marine Litter.

The main results of the DeFishGear project are:
Lead Partner