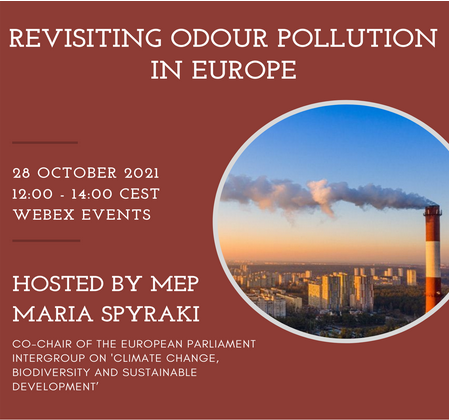 ‘’Since the COVID-19 crisis has turned the spotlight on air quality and odour pollution, now it is the moment to discuss odour control management across the EU’’.

This European Parliament Intergroup event, co-organized with MIO-ECSDE and the EU-funded D-NOSES project happened at a time when driven by the European Green Deal, many EU policies and regulations that should adequately address odour emissions, are under development or revision. The event was organized as a panel discussion on challenges related to odour pollution and its regulation from quadruple helix stakeholder perspectives: policy-makers, scientists, representatives from industry and affected communities. 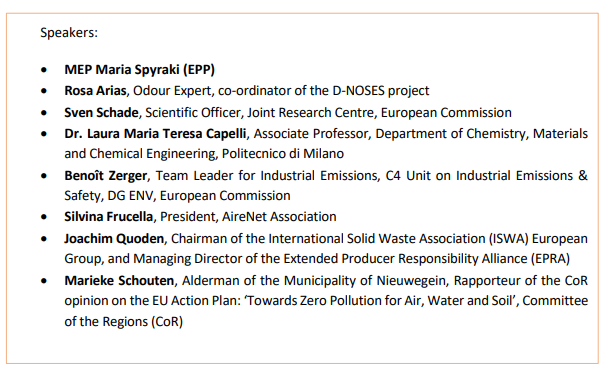 According to Mr. Sven Schade from the JRC, who presented the Commission’s staff working document on best practices in citizen science for environmental monitoring, in which D-NOSES is mentioned as one of the best practices, “The citizen science framework shows great potential to be applied at different administrative levels. It can help empower stakeholders to solve local issues.”

Dr. Laura Maria Teresa Capelli, of the Politecnico di Milano, demonstrated that ‘’Citizen science cannot solve the odour pollution problem on its own, but it needs to be integrated to odour modeling to successfully complement traditionally used odour methodologies.’’

Mr. Benoît Zerger of DGENV presented the Industrial Emissions Directive (IED) as ‘’The main tool to combat odour pollution. This integrative tool covers all forms of emissions, including odour pollution’’ and mentioned that the Commission is working on odour monitoring for slaughterhouses and animal-by-products. He also mentioned that the DGENV will consider the D-NOSES methodology and accordingly enrich odour monitoring plans.

‘’It is only by citizen science that we can truly know how odour affects people. The data they provide is thus vital for policymakers” insisted Ms. Silvina Frucella who transmitted the frustration of citizens that are affected by odours and neglected by policymakers. She concluded her intervention by saying that “it is time to invoke regulation based on the people’s needs”.

Mr. Joachim Quoden from ISWA stressed that citizens are key to waste management and stated that “citizen science projects are fully supported by ISWA, and he hopes the approach will be incorporated further into European legislation”.

Ms. Marieke Schouten, Alderman of Nieuwegein, said that as Rapporteur of the Committee of the Region’s opinion on the Zero Pollution Action Plan (final approval planned for January 2022), she will assess the possibility to mention odour pollution specifically and she promoted the Zero Pollution Stakeholder Platform as “a useful tool in making odour pollution higher on the Commission’s agenda”.

‘’We are calling for action to recognise odour as a pollutant by the EU and that it will be incorporated in EU Legislation.’’ With this statement, Ms. Rosa Arias concluded the European Parliament Intergroup event summarizing the ultimate goal of the D-NOSES project, to introduce odour pollution in policy agendas in the medium to long term based on the D-NOSES approach and a multi-level governance model.

Click here to access all webinar documents: the final agenda, the speakers’ presentations, the recording, and the summary report of the webinar.

For MIO-ECSDE, this event wrapped up, with success, the policy, and advocacy work done in the past 3 years. It is obvious that the D-NOSES methodology, tools and advocacy actions served as stepping stones towards a more harmonized management of odours. However, there is still a long way to go in the regulatory framework of odours and the recommendations of the D-NOSES Green Paper on Odour Pollution (1) and the Strategic Roadmap for Governance in Odour Pollution (2) will be solid guides for the next steps.

The D-NOSES advocacy results have set a solid foundation both for further development of research and plans by different stakeholders with specific objectives in odour pollution and citizen science and for a full-blown public debate within the European Institutions (and not only).