Did you know that odour pollution is the second most common subject of public complaints across Europe? Yet it has been continuously ignored by Governments when planning their environmental policies.

Odour pollution is an indicator of serious environmental issues, however due to the nature of the problem, even experts find it sometimes difficult to define the real cause of an unpleasant intense smell. It can be connected to an overall poor waste management in the area, long-term exposure of waste to extreme weather conditions, the temperature and more. And no – it’s not met only in “poor” cities.

For example, in September, I visited Fòrum, an area largely affected by odour pollution in Barcelona, to attend in my capacity as Junior Officer of MIO-ECSDE the second consortium meeting of D-NOSES. The modern architecture of the city; full of skyscrapers and five-stared hotels, expensive coffee shops and restaurants would never give away the level of odour pollution the city is suffering from. 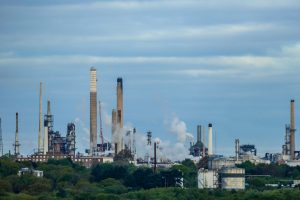 What happened is that when the city was being designed, the odour problem of the area was ignored. Several odour emitting industries, such as waste incineration, wastewater sludge treatment and other, were located close by before the construction of the city.  Now people living or working there have to deal with the annoying smell on a daily basis. That’s why Fòrum is selected to be one of the D-NOSES case studies. Using the latest methodologies, D-NOSES experts will engage with the community, try to measure the odour pollution in the area, define the source and address the issue.

The Fòrum case is only one of the more than ten case studies of D-NOSES that will give us the opportunity to share the existing scientific knowledge in odour detection and measurement with the public and build an evidence base. The results gathered will inform future plans to reduce odour pollution; develop a standardized set of regulations and influence policy at a local, national and European level.

That’s where MIO-ECSDE will bring its expertise. MIO-ECSDE is at the moment building an advocacy tool kit to assist the different case studies and partners involved and help them start putting pressure for a solution for each and every different case of odour pollution.

As a young project officer and environmentalist, I find this project quite intriguing. Due to the lack of regulations or scientific research on the issue of odour pollution, advocacy will be challenging. At the same time, that’s also why I am so excited to be part of this project and work with MIO-ESCDE to assist our partners to better advocate for odour pollution with the aim to including it in national and European agendas as another pressing environmental issue that needs our attention.