Civil Society and the Barcelona Convention: 40 years of mutual support 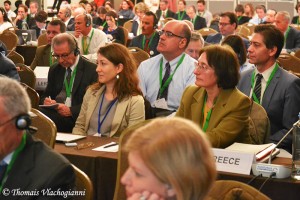 At the ministerial meeting (11 February 2016), Mediterranean ministers and parties contracted to the Convention, renewed their commitment to enhance measures to reduce pressures on the marine and coastal environment. Highlighting their concern by the continued threats posed to the Mediterranean, they adopted the Athens Declaration, in which they pledged to implement the instruments, programmes, action plans and guidelines adopted at COP19 -to prevent pollution from maritime transport, marine exploration, and land-based activities, protect biodiversity, manage coastal zones, and increase the resilience of the Mediterranean to the impacts of climate change-, as crucial means for the achievement of the objectives of the Barcelona Convention and its Protocols.

In his statement during the ministerial segment of the meeting MIO-ECSDE Chairman, Michael Scoullos said “MIO-ECSDE has been one of the most faithful and consistent supporters of UNEP/MAP since its establishment. Even if sometimes critical, it has always been constructive, with good intentions, without hidden agendas. The work that MIO-ECSDE is doing for the empowerment of NGOs and CSOs of the Mediterranean is very much needed by UNEP/MAP. Despite its very limited resources MIO-ECSDE has been one of the key actors in the region playing effectively a catalyst role at many levels (global, regional, sub-regional, national and local) through its 130 members which bring together many millions of individual citizens.”

On the first day of COP19, MIO-ECSDE organized jointly with UNEP/MAP a side vent entitled “Tackling marine litter in the Mediterranean”, offering a sense of relief that important steps and actions on this serious challenge have been taken in the region. Read more here