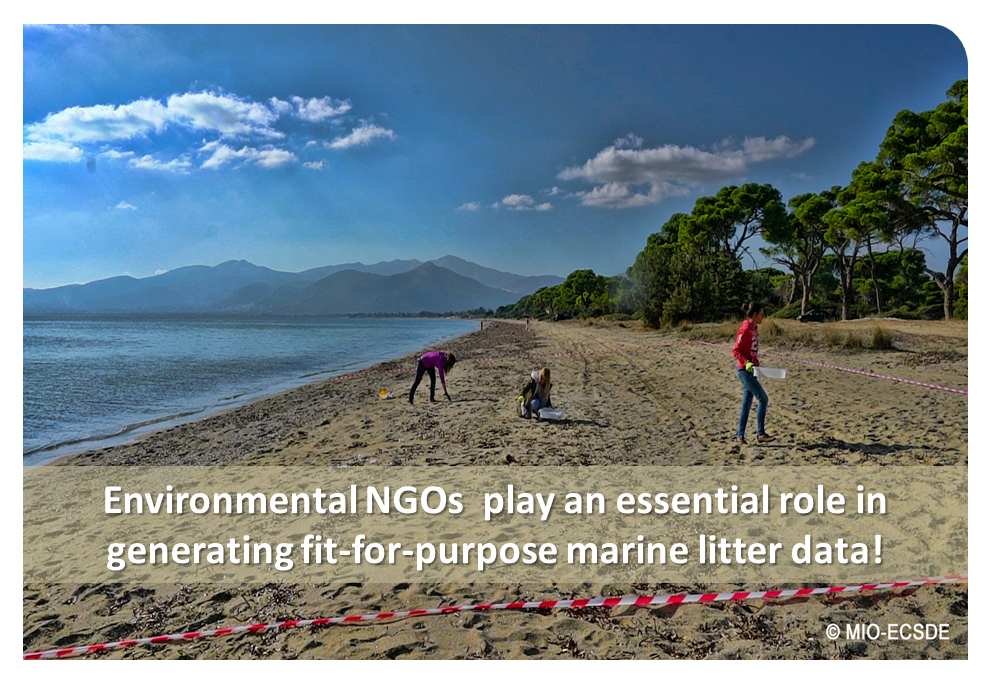 Throughout the years Mediterranean NGOs have significantly contributed to providing data and information on the temporal and spatial distribution of marine litter found stranded on beaches. Monitoring surveys, adopt-a-beach schemes or beach clean-up campaigns are the most popular approaches used. On the other hand, several Mediterranean governments within their formal marine litter monitoring programmes are considering community-based data collection initiatives as a useful tool to fill in the knowledge gaps. The involvement of NGOs in data collection is increasingly seen to be a cost-effective way to gather required evidence and detect emerging issues. Essentially, NGOs are supporting public authorities to improve their efficiency with less administrative burden.

In the second part of 2018 MIO-ECSDE set up and implemented a participatory-science campaign in order to fill in the knowledge gaps with regards to marine litter found on Mediterranean beaches. The results provide fit-for-purpose data for the effective management of marine litter in the region.

Being true to the beach litter monitoring guidelines of the Marine Litter Technical Group of the Marine Strategy Framework Directive, the aforementioned NGOs performed two sets of beach litter surveys; from mid-September to mid-October 2018 (autumn surveys) and from mid-November to mid-December (winter surveys). A total of 23 sites were investigated and 62 beach transects surveyed, extending over a distance of 6,200 m and covering an area of 113,780 m2.

A total of 37,991marine litter items were recorded; this amounts to a relatively high average litter density of 1,714 items/100 m stretch or 0.6 items per square meter (ranging from 0.04 to 6.66 items/m2). The majority of litter items were made of artificial polymer materials and accounted for 90% of all litter. Litter from shoreline sources, such as tourism and recreational activities and poor waste management practices, accounted for 38% of all litter collected; while the amount of sanitary and sewage related items accounted for 7%. The most frequently found items included plastic pieces 2.5 cm > < 50 cm accounting for 26% of the total litter items recorded in all surveys, followed by cigarette butts and filters with 12%, plastic caps/lids from drinks with 8.1%, cotton bud sticks with 6.3%, polystyrene pieces 2.5 cm > < 50cm with 5.8% and straws and stirrers with 3%. The large amount of smoking-related items and single-use items found, such as straws and stirrers are indicative of the typology of investigated beaches which primarily were tourism and recreation destinations.

To-date, the present study is one of the very few collective efforts of NGOs to assess, in a comprehensive and harmonized way, marine litter deposited on Mediterranean beaches. The present study provides fit-for-purpose data and baseline information on the amounts, composition and sources of marine litter in several Mediterranean beaches. It is a useful tool for decision-makers to gear up their efforts in the combat against the marine litter threat and identify targeted measures to tackle this threat at its source. 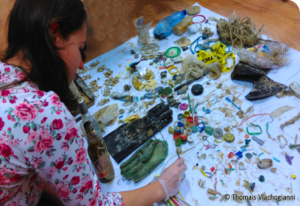 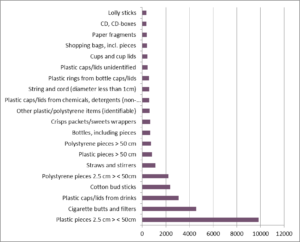 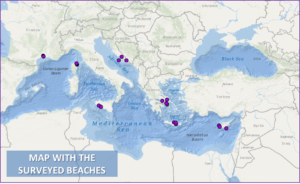