European Commission confirms lengthy delay, is this the end of the EU Strategy for a Sustainable Built Environment?

The Drin Dialogue Consultation Meeting in Tirana: Moving towards a shared vision for the management of the extended Drin Basin

Representatives of national, regional and local authorities, water users associations, academia, members from the private sector, NGOs as well as representatives of international organizations and donor countries met on 5 April 2011, in Tirana, Albania to: 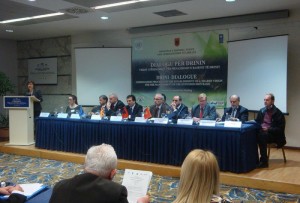 At the meeting the main challenges in the Drin basin as well as possible responses were discussed. Enhanced transboundary cooperation for the sustainable management of the extended Drin basin institutionalised through a joint commission was acknowledged as one of the responses, among others, to decrease risks for serious floods as those that occurred in December 2010, as well as to enhance the protection of biodiversity.

On the following day (6 April 2011), during the 3rd Drin Core Group Meeting the results of the national consultation were discussed as well as the plans further developing an agreed shared vision for the joint management of the transboundary Drin basin by autumn 2011.

The Drin Dialogue is a structured consultation process launched on December 1st, 2009 which aims to establish a Shared Vision for the management of the extended Drin River Basin. The Drin Dialogue is conducted within the frameworks of the UNECE Water Convention and the Petersberg Phase II / Athens Declaration Process. Activities within the Dialogue contribute directly to and are part of the Mediterranean Component of the EU Water Initiative and of the GEF MedPartnership. The Drin Dialogue is facilitated by UNECE and the Global Water Partnership-Mediterranean (GWP-Med) and is financially supported by the Swedish Environmental Protection Agency. It is also supported by MIO-ECSDE.

The Mediterranean Information Office for Environment Culture and Sustainable Development (MIO-ECSDE) as member of the Drin Core Group has committed itself to support the dialogue at regional level (politically, technically, through communication/awareness raising actions, etc); to contribute in establishing a common understanding and shared vision via the coordinated involvement of civil society, and particularly NGOs, in the Drin Dialogue; to enhance the ability and capacity of its member and collaborating NGOs in order to act in an effective and constructive way.

The Drin Basin covers a geographical area that includes Albania, Greece, the former Yugoslav Republic of Macedonia, Kosovo (U.N. administered region, S.C. Res. 1244) and Montenegro. The Drin River is the “connecting body” of this water system, linking the lakes, wetlands, rivers and other aquatic habitats into a single ecosystem of major importance. The region is very rich in endemic species and exceptional in terms of biodiversity conservation, and so has great potential for the development of sustainable tourism.

The UNECE Convention on the Protection and Use of Transboundary Water and International Lakes (Water Convention) is an important legal framework for transboundary water management in the pan-European region. Currently, 35 countries and the European Community are Parties to the Convention. The Former Yugoslav Republic of Macedonia and Montenegro are preparing for accession; Albania and Greece are already Parties.

The Global Water Partnership-Mediterranean (GWP-Med) is a platform bringing together competent organizations working on water issues in the Mediterranean region. Created in 2002, this NGO promotes and exchanges knowledge on integrated water resources’ management for the sustainable use of the region’s water resources. GWP-Med is the technical secretariat of the Petersberg Phase II/Athens Declaration Process for Southeast Europe, a framework for the development of transboundary water cooperation in the region. 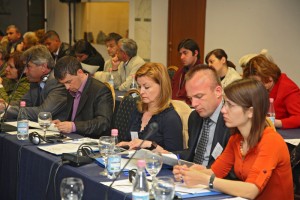 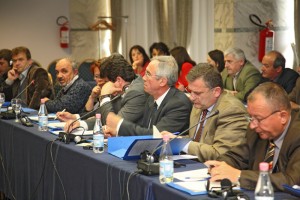