At the 9th Annual Meeting of the Circle of Mediterranean Parliamentarians for Sustainable Development (COMPSUD), held in Athens, Greece on 23 October 2012, a new board was elected to serve the Circle for the next two years. The board, which was elected unanimously, is now chaired by Ms. Dionusia – Theodora Avgerinopoulou, President of the Special Permanent Committee on Environmental Protection of the Hellenic Parliament. Mr. Antonio Ramos Pretto, President of the Environment Committee of the Portuguese Parliament and Mr. Mohammed Ameur, Member of the Moroccan Parliament and former Minister were elected Vice Chairs.

COMPSUD 9 was chaired by its outgoing Chair, Ms. Panaritis, and the General Secretary Prof. Michael Scoullos and was attended by more than 80 Members of Parliament, journalists and NGOs from 22[1] Mediterranean countries. The Circle welcomed 22 new Members of Parliament from eight countries. Among other issues, the meeting discussed fundraising prospects and the organization of national trainings for MPs through which meaningful links can be made between the Circle and National Parliaments. 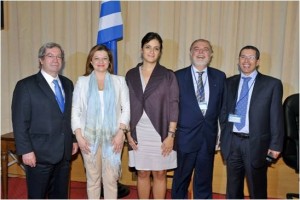 You can download the report of the meeting here

For a short CV of Dr. Avgerinopoulou follow the link here