RIO+20: Mediterraneans reaffirm their commitment to work together for Sustainable Development

At a moment of acute and persisting political, economic and social challenges in the Mediterranean, governments, inter-governmental and non-governmental organizations and other stakeholders gathered in Rio, on the invitation of the Mediterranean Information Office for Environment, Culture and Sustainable Development (MIO-ECSDE) and other major key actors, to demonstrate their commitment to overcome the difficulties and work in solidarity for green growth within a sustainable development of the region.

The Mediterranean official side event brought together distinguished personalities, such as HSH Prince Albert II of Monaco, Ernst Ulrich von Weizsaecker, Jacqueline McGlade and many more, as well as over one hundred major institutions and stakeholders from European, Western Asian and North African countries, who provided an overview of the joint efforts undertaken and achievements made towards achieving green growth in the region. The event was entitled “Challenges and Opportunities for a Mediterranean Green Growth” and was held within the framework of the United Nations Conference on Sustainable Development (Rio+20) on 19 June, in Rio de Janeiro. It was co-organized by MIO-ECSDE (you can read here MIO-ECSDE’s “Key Messages for Rio+20″), UNEP/MAP, the European Commission, the Union for the Mediterranean, the Fondation Prince Albert II de Monaco, RAED and GWP-Med. 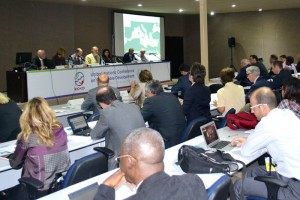 The Chairman of the meeting Prof. Michael Scoullos opened the event emphasizing that “The Mediterranean, being an active North-South interface has to provide an example and nurture hope because not only does its importance transcend that of the nations along its coasts, but it is an eco-region of high significance for the entire globe.” 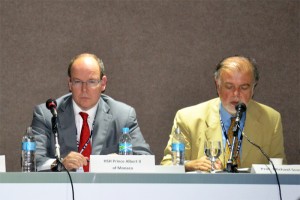 HSH Prince Albert II of Monaco addressed the audience saying that “It is necessary today to mobilise all our energies and resources to preserve this unique sea. To this end, we know that the Mediterranean can count on the genius and inventiveness of the populations living around it”. He added “Even today, I want to believe that these people will be able to devise a form of development that can preserve their greatest wealth: the sea that is the cradle of their civilisation.”

Ernst von Weizsaecker, Co-Chair of UNEP’s International Resource Panel, emphasized that a greatly enhanced resource productivity is available in the Mediterranean which helps combine economic well-being and the protection of land and sea.

Furthermore, the Union for the Mediterranean and its Parliamentary Assembly was established and a series of major EU funded projects, namely the EU Water Initiative led by Greece, the Horizon 2020 Initiative, SWIM, SWITCH-MED, etc. have been launched to help accelerate the region’s progress towards sustainable development. Civil Society organizations tirelessly continue to carry out a large number of essential initiatives such as the Mediterranean Educational Initiative for Environment and Sustainability (MEdIES), which brings together some 4000 educators etc.

Ministers, Deputy Ministers, Secretary of States and Heads of Delegations from Cyprus, Greece, Malta, Spain/Catalonia, as well as representatives of major networks and organizations, presented the steps they have taken so far while emphasizing the need for enhanced efforts and more appropriate means to enable all parties to engage in more concrete actions at national and regional levels in the sectors of marine resources, tourism, energy, education, etc. to speed up green growth in the region.

Still, all these initiatives have not managed to reverse environmental degradation and enhance social cohesion and prosperity, particularly for the poor. This is partly due to increasing pressures, such as rapidly growing population in the southern and eastern coasts, unsustainable patterns of consumption and production, inefficient governance and political instability and financial volatility, all of which hamper proper implementation of policies, strategies and commitments made at international fora.

In his closing remarks, Prof. Scoullos highlighted that “Τhe event was a clear demonstration of solidarity among all actors in the Mediterranean. Together we can do much more than each one of us alone. If we fail in this region, there is little hope for other parts of the world, where the North-South gap is bigger. We are all committed and convinced that together we can succeed for the benefit of the future generations of our region!”

The event supported the objectives of the ‘MedPartnership’ and the Mediterranean Component of the EU
Water Initiative (MED EUWI), as well as those of the EU projects Horizon 2020 Capacity Building Programme (CB/MEP), Sustainable Water Integrated Management (SWIM) and the recently launched SWITCH-MED which promotes sustainable consumption and production.

Within the framework of the official summit process, Prof. Scoullos, MIO-ECSDE Chairman, represented Greece at Round table 3: “Looking at the way forward in implementing the expected outcomes of the Conference” delivering a statement on behalf of the Government of Greece. Find his statement here