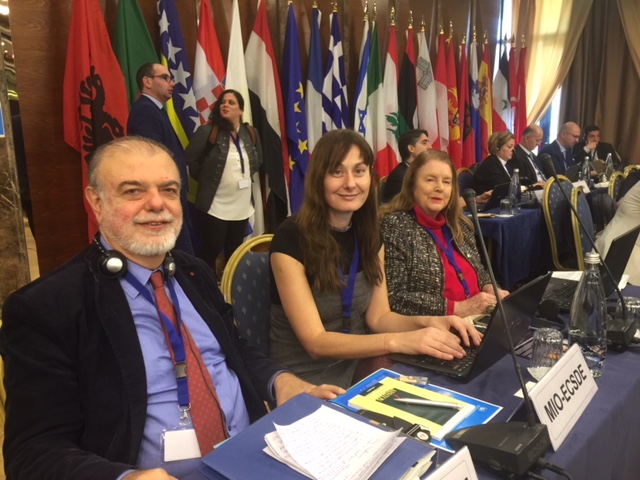 The deliberations of the 20th Meeting of the Contracting Parties to the Barcelona Convention (COP20) spanned over four days from 17-20 December 2017 in Tirana, Albania. More than 150 delegates from the 21 Mediterranean countries and the European Union that are parties to the Barcelona Convention discussed and agreed upon several decisions. The main theme of the meeting this year was the implementation of the 2030 agenda for sustainable development with focus on Sustainable Development Goal 14 on pollution and biodiversity.

During the high-level session on day three of the COP, Mediterranean ministers and parties renewed their commitment to enhance measures to reduce pressures on the marine and coastal environment. Highlighting their concern about the continued threats posed on the Mediterranean, they adopted the Tirana Declaration, in which they pledged to:

In her statement during the ministerial segment of the meeting MIO-ECSDE Programme/Policy Officer, Thomais Vlachogianni said “To achieve the targets of SDG14 within the timeframes set, it is vital to adapt, replicate and scale up existing best practice solutions. The collective Mediterranean experience has a wealth of case studies to showcase (reflected also in the recent 2017 Mediterranean Quality Status Report) on how we can work together in order to address and hopefully reverse the negative trends that affect the Mediterranean. MIO-ECSDE has actively contributed with concrete showcases related to combating marine litter, strengthening biodiversity protection combined also with education for sustainable development in coastal and marine MPAs, facilitating dialogue and consensus building for ICZM and IWRM in transboundary settings; enhancing interactions on the science-policy interface”.

She continued “The time has come to undertake collective and concrete actions for a more decisive and comprehensive response to stop marine pollution. The Parties of the Barcelona Convention need to step up their efforts and galvanize theirs actions and partnerships also with civil society actors in order to meet the SDG14 targets set.”

Ms. Vlachogianni also stressed that more effective collaboration between civil society and Contracting Parties is critical to implement the 2030 Agenda for Sustainable Development and achieve SDG14 and called for stronger linkages to the NGO and civil society sector, in terms of funding and support, enhanced involvement of NGOs in the decision-making process but also in terms of creating pathways for NGOs to report on the how the achievement of SDG14 is progressing in the Mediterranean.

On the last day of COP20, MIO-ECSDE organized a side event entitled “SDG14 and Marine Litter: what progress has been made in the Mediterranean?”, offering a sense of relief that important steps and actions on this serious challenge have been taken in the region. Read more here