More than one hundred and thirty decision makers, scientists and representatives of civil society and industry from all over the Euro-Mediterranean area met in Athens on 12-13 of May 2014 to share information across borders, identify common goals and initiate joint actions to make a difference in the collective fight against marine litter.

The Mediterranean Conference on Combating Marine Litter in the Adriatic MacroRegion, along with a series of other marine litter events (read more here), was launched on the 12th of May 2014 by Janez Potočnik, EC Commissioner for Environment and well-known advocate for curbing marine litter in Europe, together with Ioannis Maniatis, Greek Minister of Environment, Energy and Climate Change and Lila Iskandar, Egypt’s Minister of State for Environment Affairs.

The working sessions of the conference were initiated the next day by Ms. Dionusia – Theodora Avgerinopoulou, President of the Special Permanent Committee on Environmental Protection of the Hellenic Parliament and President of COMPSUD. Intensive and productive discussions and deliberations followed, triggered by a series of presentations on the main challenges of the marine litter issue and key initiatives to tackle the problem at European and Mediterranean level through actions to prevent, reduce, remove and sustainably manage marine litter.

Ms. Dionusia – Theodora Avgerinopoulou, President of the Special Permanent Committee on Environmental Protection of the Hellenic Parliament and President of COMPSUD, in her openning remarks

The coordinated and harmonized actions of the DeFishGear project on how to combat marine litter in the Adriatic Sea were showcased. They are expected to provide strategic input to regional efforts in successfully achieving good environmental status in the Mediterranean Sea. The DeFishGear project was introduced to participants by its coordinator Dr. Andrej Krzan (NIC) who emphasized features such as its cross border, knowledge exchange, networking and harmonization aspects. Dr. Thomais Vlachogianni (MIO-ECSDE) and Ms. Andreja Palatinus (IWRS) provided insights to the project’s planned activities, deployed methodologies and the progress made with regards to the assessment of macro-litter and micro-litter, including socio-economic implications. Last but not least, Mr. Paolo Pelusi (Mediterranean Consortium), leading the activities on setting up a ‘Derelict Fishing Gear’ and ‘Fishing for Litter’ management system in the Adriatic Sea, elaborated on the key challenges and lessons learned so far, as well as on the planned activities. 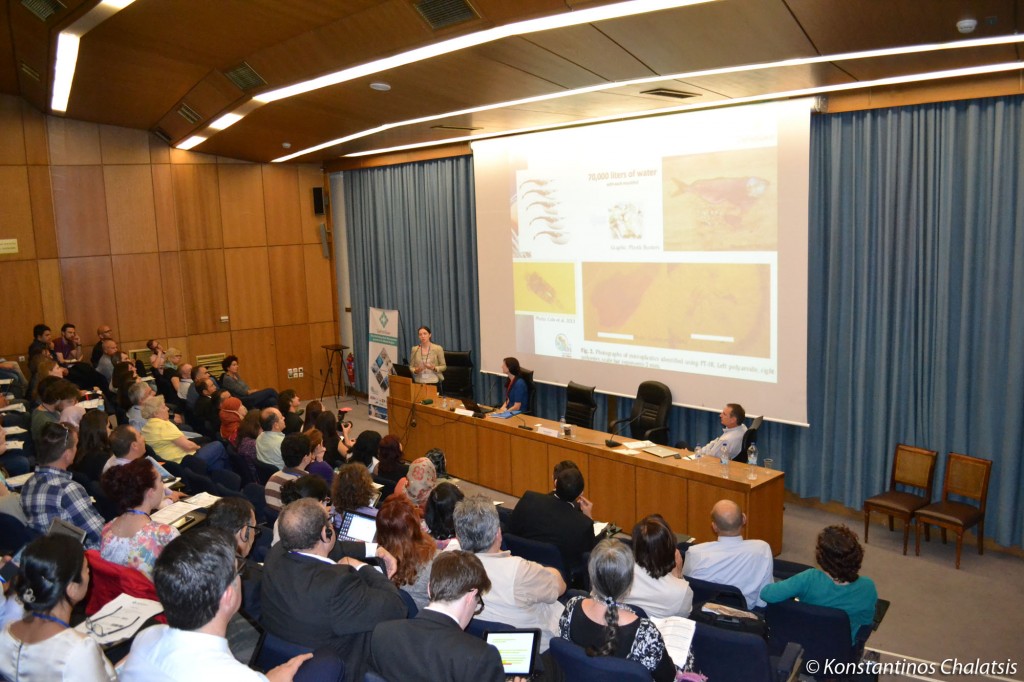 Ms. Andreja Palatinus from Institute of Water of Slovenia

In the afternoon, participants brainstormed in groups on concrete actions needed to tackle marine litter, among which the following were prioritized:

These measures, as main outcomes of the conference, were elaborated and presented by Prof. Michael Scoullos H2020 CB/MEP Team Leader at the Informal Meeting of EU Environment Ministers held in Athens, Greece on the 14th May 2014.

The event was organized by the Mediterranean Information Office for Environment, Culture and Sustainable Development (MIO-ECSDE) within the framework of the IPA Adriatic funded DeFishGear project in collaboration with Horizon 2020 Capacity Building/Mediterranean Environment Programme and MARLISCO, under the auspices of the Greek Presidency of the European Union and the Ministry of Environment, Energy and Climate Change of Greece.

A report on the meeting’s discussions and main outcomes will be published by mid June 2014, as well as the videos of all presentations.

Please find the agenda and the list of participants of the meeting below.