The Civil Society Dialogue on Mediterranean Processes: UfM Ministerial on Environment – Climate Change COP Copenhagen – Long Term Strategy on Water in the Mediterranean took place a few days ago on the 1st of November 2009 in Cairo, Egypt at the premises of the League of Arab States.

The Dialogue focused on the roles and synergies among various representatives of civil society (NGOs, Members of Parliament, journalists and representatives of other stakeholders) in order to provide a coordinated and effective input in specific current processes of high importance for the sustainable development of the Mediterranean region. The event was organised by MIO-ECSDE, GWP-Med and RAED with the financial contribution of the European Commission and Sweden. In kind support was offered by the Ministry for the Environment of Egypt, the League of Arab States and the Arab Office for Youth and Environment.

The Civil Society meeting was attended by 140 participants (list of participants). Opening remarks were made by Dr. Emad Adly, General Coordinator of RAED, Prof. Michael Scoullos, Chairman of MIO-ECSDE and GWP-Med and Dr. Mawaheb Abdel Moneim Abou El-Azm, Chief Executive Officer, Egyptian Environmental Affairs Agency. A message from EU Commissioner for the Environment Stavros Dimas was read to the participants, where he requested Civil Society to “keep up the pressure on the people who work in administrations. Your scrutiny and comments are extremely valuable. We need to constantly question and evaluate our actions and their results, and your pressure helps us do that”. Particular mention was made to the Horizon 2020 Initiative, the upcoming COP Meeting of the Barcelona Convention and the meeting of the Council of Arab Environment Ministers, the GEF ‘Petersberg Africa’ Project supporting dialogue activities of Parliamentarians in priority regional and sub-regional policy processes for integrated water resources management as well as the GEF Strategic Partnership for the Large Marine Ecosystem.

Two key input presentations were made by Ms. Barbara Tomassini, Global Water Partnership-Med, on the Long Term Strategy on Water in the Mediterranean (En, Fr) and by Henk Van Schaik (En), Cooperative Programme on Water and Climate, on the Climate Change COP Copenhagen (En). Participants were also informally informed about the preparations towards the Union for the Mediterranean (UfM) Ministerial Conference on the Environment to take place in Dubrovnik on 26-27 November by the Chairman of MIO-ECSDE, Prof. Michael Scoullos.

After the presentations an arduous discussion took place on the draft inputs (sent a few days before the meeting in English and French) from Civil Society representatives to the UfM Ministerial on Environment – Climate Change COP Copenhagen – Long Term Strategy on Water in the Mediterranean, accordingly. By the end of the afternoon session the following documents were finalised:

The Civil Society Dialogue also provided the background of the 7th Meeting of the Circle of Mediterranean Parliamentarians for Sustainable Development (COMPSUD) (Full text reports: En, Fr) and the Circle of Mediterranean Journalists for Environment and Sustainable Development (COMJESD). Each of the Circles held their own closed sessions after the conclusion of the Civil Society Dialogue.

Furthermore, the Dialogue was intrinsically linked with the National Workshop on Climate Change organized on the previous day by RAED with the support of the Ministry of Water Resources and Irrigation of Egypt, ABRI (Advancing the Blue Revolution Initiative), ISDR (International Strategy for Disaster Reduction), PME (Presidency of Meteorology and Environment), IWA, RITSEC and Cedare.

Overall, all foreseen activities took place as scheduled and also all objective of the meeting were fulfilled.

The adopted Mediterranean Environment Civil Society statement on Climate Change, which addresses regional fora, the UN Climate Change Conference in Copenhagen and decision makers at all levels, was presented at the UNEP-MAP 16th Ordinary Meeting of the Contracting Parties to the Convention for the Protection of the Marine Environment and the Coastal Region of the Mediterranean and its Protocols, Marrakesh, 3-5 November 2009 by the MIO-ECSDE representative Dr. Thomie Vlachogianni. There is very clear reference to the intervention in the draft final report of the 16th COP. Furthermore, copies of the document were made available outside the conference room and all delegations and organizations were invited to examine it. When read out in the plenary, it was applauded genuinely. Also, a copy of this document will be sent to each delegation and organization present at the meeting.

This document as also presented by Ms. Anastasia Roniotes, Head Officer of MIO-ECSDE, to the 2nd Meeting of the Water Expert Group (WEG) that guides the elaboration of the SWM and which took place on the 4th of November again in Cairo. The WEG acknowledged the document and mentioned it in its final conclusions.

To read the full report of the meeting in pdf file click here. 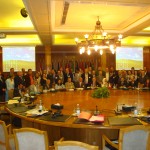 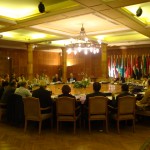 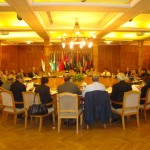 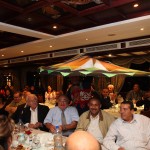 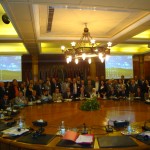 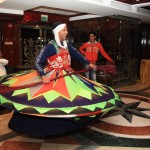 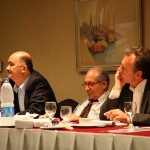 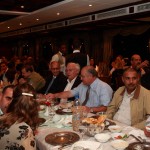