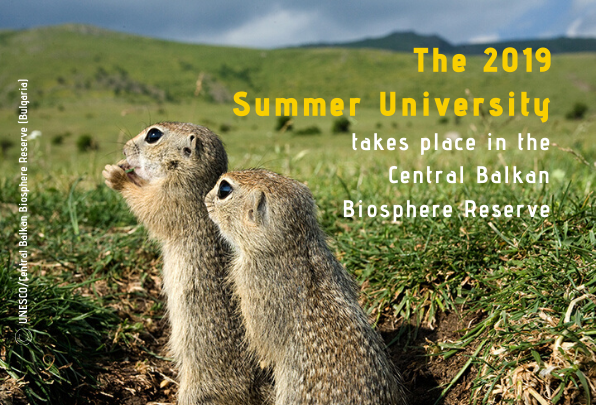 MIO-ECSDE, through its long-standing educational initiative MEdIES, co-organised and scientifically supervised the 5th in a series of Summer Universities that have been (co)organised by MIO-ECSDE in Amfissa (2014), Samothraki (2016), Sardinia (2017) and Parnon (2018) on topics related to the sustainable management of Protected Areas and Biosphere Reserves (BR).

The 2019 Summer University, co-organised with the UNESCO Venice Office, the Bulgarian Biodiversity Foundation and a series of stakeholders from Bulgaria, took place from 21 to 28 July at the Central Balkan Biosphere Reserve. The topic was Integrated Management, Sustainable Tourism and Promotion of Biosphere Reserves. 35 participants from 15 countries were accepted out of 125 applicants.

It was an intensive, multidisciplinary and experiential training that aimed to develop the understanding and competences of the participants on the management of protected areas, including Biosphere Reserves, Nature 2000 sites and other designated areas, as “laboratories” and “catalysts” for Sustainable Development.

The Central Balkan Biosphere Reserve embraces a population of 129.600 inhabitants in an area of 369.000 ha, including 5 municipalities and 7 nature reserves as well as over 580 km of hiking trails (for horseback riding, cycling and wildlife watching). Parts of it have been protected since 1948. The site was declared a biosphere reserve with its current boundaries in 2017. The new reserve includes the Central Balkan national park and contains rare and endangered wildlife species. It contains the most important old beech forest massif in the country (71% of the national park).

Over the course of a week, the participants worked in groups, focusing on large-scale joint communication projects; connecting and involving young people; enhancement of local products and tourist services for the sustainable development of the territory; Education for Sustainable Development projects within BRs and other designated areas.

Prof. Michael Scoullos, Chairman of MIO-ECSDE, presented the evolution of Education for Sustainable Development and how its philosophy, concepts and methods can be linked with the management of designated areas and encouraged the deputy Mayor of Troyan Municipality and the Director of the Central Balkan National Park to inform and engage all local stakeholders – citizens, businesses, institutions, NGOs, etc. – in achieving sustainable development in the region.

Some of the most interesting proposals of the trainees related to the establishment of a local or national Youth committee; the development of a common integrated map of the tourism potential of the Central Balkan Biosphere Reserve; the training and capacity building of the tourism sector and the development of a common trademark of Central Balkan BR, including local tourist attractions, products and crafts.

MIO-ECSDE focuses on BRs because of the Natura 2000 sites they encompass, and because they combine natural and social sciences, economics and education to improve human livelihoods and the equitable sharing of benefits and to safeguard natural and managed ecosystems. By promoting innovative approaches to economic development that are socially and culturally appropriate and environmentally sustainable, they also contribute to the fight against climate change and its negative impacts via integrated, multidisciplinary, participatory approaches and networking on climate change mitigation and adaptation.

The 2019 Summer University in Bulgaria was organized by the Bulgarian Biodiversity Foundation with the support of the Central Balkan Biosphere Reserve, UNESCO Regional Bureau of Science and Culture in Europe, Ministry of Environment and Water of the Republic of Bulgaria, Mediterranean Information Office for Environment, Culture and Sustainable Development through MEdIES, UNESCO Chair and Network on Sustainable Development Management and Education in the Mediterranean of the University of Athens, Karlovo Municipality, Troyan Municipality, Permanent Representation of UNESCO in Bulgaria and local sponsors of the event (organic farms, wineries and hotels).